After some promising signs in May and June, the recovery of the theatrical market has stalled in recent weeks, most likely due to the growing effects of COVID’s Delta variant on movie fans’ enthusiasm for going to theaters. Our market forecast for 2021, which stood at $5.8 billion last month is down to $4.7 billion as of today, a precipitous $1.1 billion drop that’s the result of recent releases underperforming, some changes to the release schedule, and an adjustment to our model that attempts to reflect the current state of the pandemic and the theatrical business. Unfortunately all three factors are dragging down our prediction for the year. 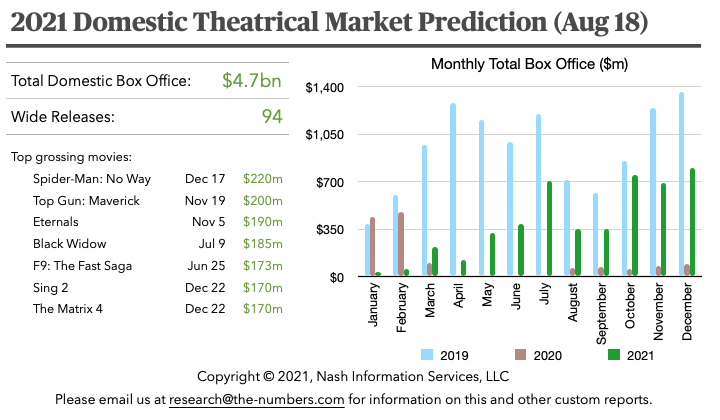 The green bars in the chart show the model’s prediction of how much films released in each month this year will earn in total, and they tell a fairly dismal tale for August and September after July’s high point of $700 million in earnings led by 2021’s top earner so far, Black Widow. The disappointing start for The Suicide Squad, which brought in $26.2 million over its opening weekend, has left the remaining releases this month with too much to do to turn this into a strong month, even though Free Guy made a better-than-expected $28.4 million last weekend.

The model thinks PAW Patrol: The Movie is the only remaining film released in August with a shot at earning over $50 million, and that the month as a whole will deliver around $350 million in business—almost exactly half what films released in July will end up earning.

September is also predicted to be a $350-million month, and that’s assuming Shang Chi and the Legend of the Ten Rings can open with around $58 million, and go on to earn $160 million in total. That’s certainly not out of the question, given that Black Widow opened with $80 million and F9 with $70 million, but it would be only the third film released this year to earn over $50 million on opening weekend.

The one factor working in Shang Chi’s favor is that it will play exclusively in theaters for 45 days, rather than getting a simultaneous release on Disney+. The model doesn’t adjust for that (at least, not yet—it’s something I’m actively researching), so it could be slightly underestimating the film’s potential.

After a slow August and September, things should pick up in October, but not as much as previously hoped for, partly due to some moved release dates, but mostly because of a change I’ve made to the model.

The understand why I’ve made that change, here’s our measure of the share of movie audiences currently going to theaters, along with Morning Consult’s tracking. 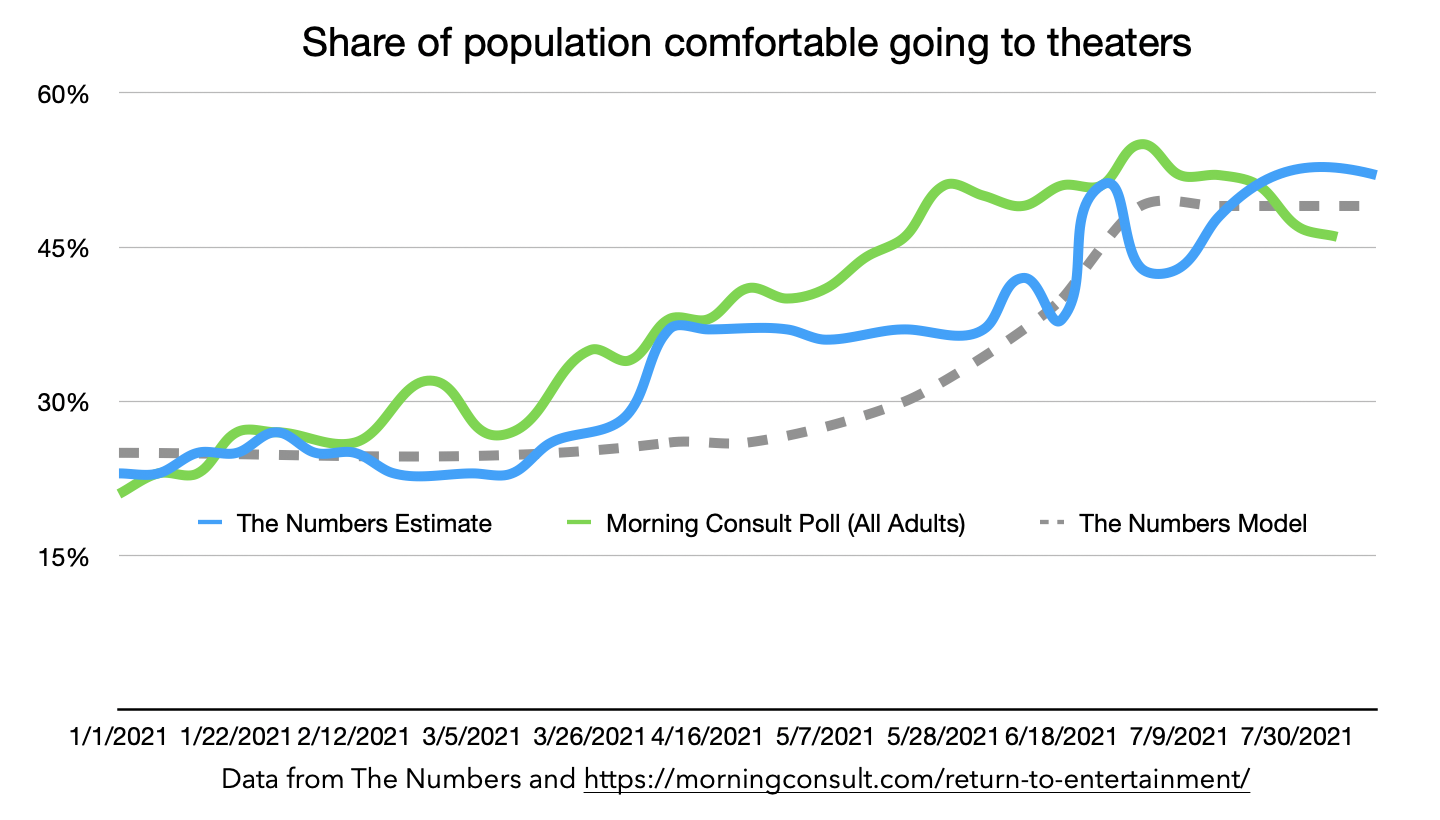 The early days of the market recovery, from March until the end of May, saw fairly steady growth in the share of the population comfortable with going to theaters. Our model lagged behind Morning Consult’s polling for a while as some films underperformed expectations, but the trend was pretty clear. This time last month there were some warning signs that enthusiasm had plateaued, and recent events seem to have confirmed that. Where our model expected the current audience to be over 60% of usual by now, the actual figures are hovering around 50% and possibly falling.

The cause for this is quite clear: the Delta variant has caused an increase in the number of reported COVID cases around the United States, particularly in the South, which makes some people more cautious about going to public spaces, and some states have reintroduced restrictions on public activities.

Modeling out what this means for the rest of the year is challenging. It’s possible (although no-one hopes this is the case) that only half the old audience will ever return to theaters, regardless of what happens with the pandemic. If that happens, the three lines on the graph will remain essentially flat.

I think it’s more likely that we’ll see enthusiasm increase once the Delta wave has passed. Past waves have taken about three months to wax and wane, and it looks as though we might be reaching the top of this one. That implies that the wave will “end”, in the sense that local restrictions will be relaxed and moviegoer interest will increase again, in about six weeks—sometime around the beginning of October, in other words.

From there, I expect another “S”-shaped recovery to the point where 70% of regular moviegoers have returned. How long that recovery will take is another mystery, but I’m assuming three months in the current iteration of the model.

In summary, the model’s assumption of the market recovery is that it started at around 25% at the beginning of April, rose to 50% by early July, has plateaued at that level and will stay there until the beginning of October, and then increase to 70% by the end of the year/early January.

I’ll be the first to admit that this prediction comes with a lot of assumptions, and things are likely to turn out differently in the details. The main unknown is how much of the traditional audience will eventually return to theaters. If 70% turns out to be about the right number, then the model should be doing a pretty good job of predicting the rest of the year. If it’s 55% or 95%, things will diverge from the model once the latest wave of infections passes.

The movements in the model’s prediction for individual films is a sea of red this month. The Suicide Squad’s underperformance has been much talked about, and has the biggest overall effect. The cancellation of the release of Hotel Transylvania: Transformania has almost as big an influence of the market prediction, as it was expected to start a wave of major new releases in October. The move for Clifford the Big Red Dog also pulls things down (although I personally think the model is a little too enthusiastic about its potential).

Those three films account for $365 million of the billion-dollar-plus change in the market projection for 2021, but the bulk of the overall change comes from downwards adjustments for the all the other films coming out between now and the end of the year. Releases in September and October are particularly hard hit because the model expects a slow pick-up in interest that only begins in early October—previously it assumed the market recovery would be more-or-less complete by then.

There’s a real risk that studios respond to dampened expectations by making more changes to the release schedule. However, I think there’s a growing recognition that endless delays are in no-one’s interest in the long term and that getting Shang Chi and Dune (for example) into theaters on their current timelines is probably better for their respective studios than pushing them into 2022 and hoping that the market will have recovered further by then. As the past month has shown, the pandemic makes planning much into the future a bit of a mug’s game.

One other factor that could come into play is that CinemaCon, the theatrical industry’s big annual gathering, is scheduled for next week. That’s the studios’ chance to drum up enthusiasm among the theater chains for their big releases through the end of the year. From a marketing perspective, doing a big push for a film like Shang Chi (which is being screened at the event) or Dune and then changing the date again would be foolish. We might still see some shuffling in the next few days, but my hunch is that the major studios will keep their current dates through the end of the year if they possibly can once they’ve confirmed them to their theatrical partners in Las Vegas.

Our market prediction is based on the same model as the weekend predictions that we’ve been running since theaters started reopening towards the end of last year. We are now running the prediction model for every announced wide release on the release schedule and estimating the size of the market as a whole by assuming a relatively small amount of additional revenue from limited releases. The prediction for each movie is based on four factors:

The current state of the theatrical market. We update our model after each weekend with a wide release to estimate what proportion of formerly-regular moviegoers are currently going to theaters. As of today, that figure is 52%. We also monitor Morning Consult’s weekly survey of moviegoers, and may make adjustments to our analysis if our number varies significantly from theirs.

Adjustments for specific genres. The pandemic has affected different segments of the audience in different ways. We are currently using four categories of movie in our model: “date night” films (which are doing worse than the general market), action movies (which are doing slightly better), family films, and “everything else” (which includes drama, comedy, and horror movies, among others). Family films seemed to be doing the best in the early stages of the recovery but are now performing much more like other genres.

The expected recovery of the theatrical market as the pandemic is brought under control. The model assumes that the market will settle back to 70% of its pre-pandemic size at the end of the recovery. Growth will be slow at first, accelerate as more people become confident in going to theaters, and then slow down as more cautious moviegoers take time to return to attending. This is the classic ”S-shaped” curve seen in economics textbooks (and in many cases in the real world). (For more on this see my previous article, How quickly can the box office recover?) The model assumes that this recovery started on April 1, plateaued in July due to the wave in COVID in infections caused by the Delta variant, and will start again when cases wane at the beginning of October. Those parameters are likely to be adjusted as the market situation evolves.