When theater counts came out on Thursday, it looked like we were heading towards a tight race at the top of the box office chart between newcomer Candyman, which is launching in 3,569 theaters, the returning champ Free Guy, which has shown good legs so far, and PAW Patrol: The Movie, which debuted in second place last weekend and should enjoy a good hold given its family audience. With preview figures for Candyman now in, it goes into the weekend the clear favorite, although an upset is still possible. 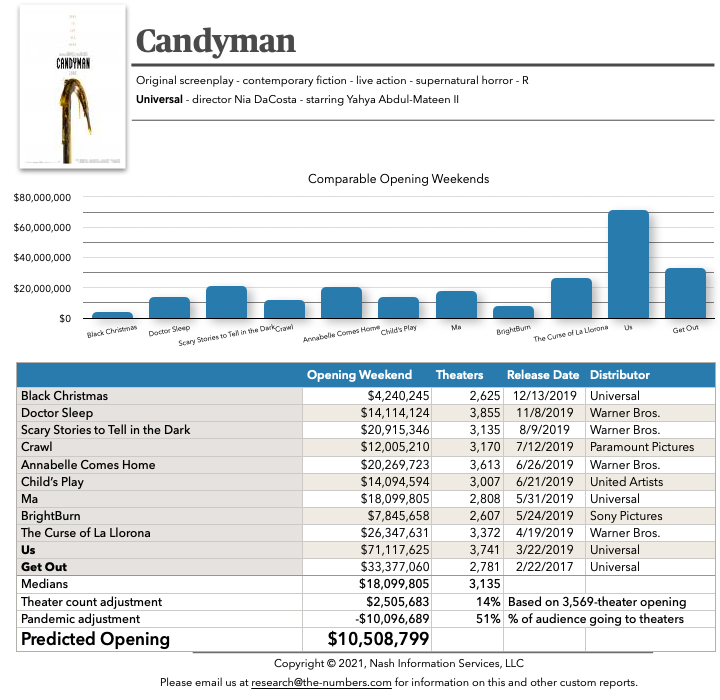 Without the benefit of the preview numbers, our model expected Candyman to open with a little over $10 million. The big wildcard, however, is the influence of Jordan Peele, who wrote and directed the mega-hits Get Out (which opened with $33.4 million back in 2017) and Us (which opened with $71.1 million in 2019). Peele co-wrote and produced Candyman, and has been promoting the film, but the fact that he isn’t directing this one probably counts against it.

His involvement is certainly worth a few million dollars on opening weekend though, and did boost the model’s prediction a little. It also made the prediction more speculative: studio horror films like this usually open in the $14 million to $20 million range, but Peele has done much better than that in the past. Given the market is still running at around 50% of usual (the model estimates 51% right now), an opening in the range of Get Out’s $33 million would be a stretch, but half that, $16.5 million would seem doable.

As demonstrated by the preview numbers on Thursday…

Horror movies tend to earn around ten times their preview figure over the weekend as a whole, although there’s quite a range of results. If Candyman has a multiplier closer to Escape Room 2 it’ll earn $13.9 million this weekend. If its multiplier is the same as Spiral it’ll hit $21.9 million. $18.8 million seems like quite a good number to work with though, with the potential for something a shade higher if it performs like Don’t Breathe 2, for example.

The prediction for Candyman puts it well ahead of Free Guy over the weekend, according to the model. That’s assuming a 31% drop for the returning champion, which is slightly better than the 40% weekly decline it had on Thursday. So the result for the weekend could only be reversed if Free Guy has an unexpectedly strong hold, and Candyman fades considerably.

The only thing that gives me pause is that Candyman’s Thursday previews were only 20% higher than Free Guy’s daily total of $1.56 million. That’s not a massive margin to be playing with, but Candyman will have the benefit of counting its $1.9 million on Thursday towards its weekend total. That might prove to be the cushion it needs to come out on top for the weekend as a whole even if it doesn’t live up to our new expectations.

Overall, this looks like a down weekend at the box office, with the model predicting an 8% decline in earnings among the top eight. If PAW Patrol has good legs, and Candyman holds on better than expected, we could end with an up weekend for the market, but it’ll take everything coming out just about perfectly for that to happen. The good news is that it doesn’t look like we’ll have a significant decline at the box office this weekend, which is a win as we go into the slowest part of the year for new releases.