The first great offensive for the broadcast of football the season 2020/2021 has been released. With Vodafone completely out of the football war for the third year in a row, and the second without Jazztel, Movistar and Orange are the only operators that will broadcast all the football from their pay television platforms.

With respect to the final prices announced last season, the hiring of all football supposes the increase of 6 euros per month in Movistar and 5 euros more in Orange, although in both cases they include discounts for new customers, and they have also improved conditions in fiber, mobile and television compared to what was offered a year ago.

Competitions broadcast by each channel

Regarding the quality of broadcast of these channels, most will be in Full HD, and the broadcast of two games per day in 4K HDR of LaLiga Santander, FC Barcelona and Real Madrid matches and there will also be 4K Champions League matches.

For the 2021/2022 football season, Movistar maintains its Fusion rates practically unchanged to watch football. With Fusion Selection It allows you to choose between LaLiga or Champions for 95 euros, including fiber at 300 Mbps and mobile with unlimited GB. Fusion Plus footballIt will include all football, 1,000 Mbps fiber and unlimited mobile data for 120 euros.

Orange also repeats its strategy with Love Total rates, with all football from 95 euros with fiber at 500 Mbps and unlimited GB on the mobile (and speed limited to 2 Mbps from 30 GB). No speed limitation in unlimited GB, with two mobile lines, 1,000 Mbps fiber and subscription to Netflix HD, Love Total Plus has a cost of 110 euros.

That is, Movistar and Orange start from a similar price of around 95 euros to watch football, although in Movistar it is necessary to choose one of the competitions, and in Orange you will have to settle for unlimited data at 2 Mbps after consuming 30 GB. Without these restrictions, the price to see all the football is between the 110 euros from Orange and 120 euros from Movistar.

As a promotion for new hires, Orange offers a discount of 25 euros per month for six months in any of its three rates (150 euros in total). In addition, it also includes a free subscription to Amazon Prime for one year.

Movistar offers a 50% discount on any of the rates for three months, achieving savings of up to 187 euros in Fusión Plus Fútbol. In addition, it also includes a free Netflix subscription for three months, and allows you to choose for free between a smartphone 5G o una Smart TV Xiaomi 55″ in exchange for a three-year stay.

The final prices On which the aforementioned promotions for new customers are applied, the conditions of the rates, and the channels included in each television platform, are as summarized in the comparative graph: 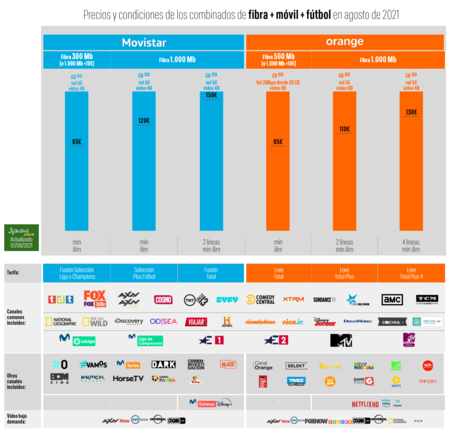 Other platforms to watch football

If last season, football fans were left with no alternative that did not depend on any operator or on hiring a combination of several services, for now it seems that this year we will also be left no football on no OTT. Mitele plus, was the last to offer this possibility, two seasons ago.