One of the oldest box office records on the books will be broken this weekend as Shang-Chi and the Legend of the Ten Rings will break The Sixth Sense’s 22-year-old record for the best Labor Day weekend in theaters. That record stands at just $29.27 million, not adjusted for inflation, but Shang-Chi will almost certainly break the inflation-adjusted record of $53.99 million too, based on our weekend prediction and analysis of its Thursday preview numbers. It would have to show surprising legs over the weekend to beat Black Widow’s $80-million and claim the best weekend of 2021 though. The real question is whether it can top F9’s $70-million second-place figure.

Before getting into the final prediction for the weekend, here’s what our model said before we had news of the preview figures. 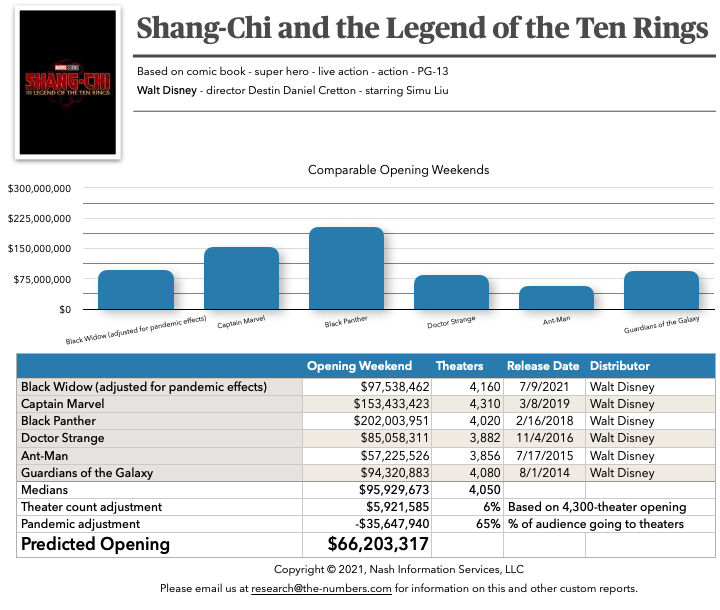 We’ve now reached the point where I’m confident enough in the accuracy of our model to include movies released during the pandemic in our analysis. The model thinks that Black Widow’s $80-million opening would have been a $97.5-million weekend under more normal market conditions, which is squarely in the middle of the pack for character-debut films in the MCU. Given Shang-Chi’s impressive 4,300-theater release, the model thought it should do around $66 million this weekend before we knew its Thursday preview numbers.

Now we know it did $8.8 million in previews, the weekend prediction moves up a bit, to $72 million, although that’s based on the performance of all of the comparable Marvel films. If it did as poorly as Black Widow through the weekend, it would only reach $53.6 million by Sunday evening.

The conventional wisdom is that Black Widow’s longevity through the weekend was reduced because of its availability on Disney+, and this weekend will put that theory to the test a bit: if Shang-Chi holds on better, it’s evidence that having a movie only play in theaters will draw in the more casual fans who would otherwise opt to watch the film at home.

My hunch is that some of those casual fans are going to stay home for other reasons this weekend, and that the multiplier for Shang-Chi will be a little lower than 8.22. That might result in a weekend slightly under $70 million for the three-day weekend, but in any case it’s a good result given the current state of the market and the fact that the film is being released in what is traditionally a very slow of the year. For my money, F9’s second place among 2021 openers is probably safe, if only by a narrow margin. 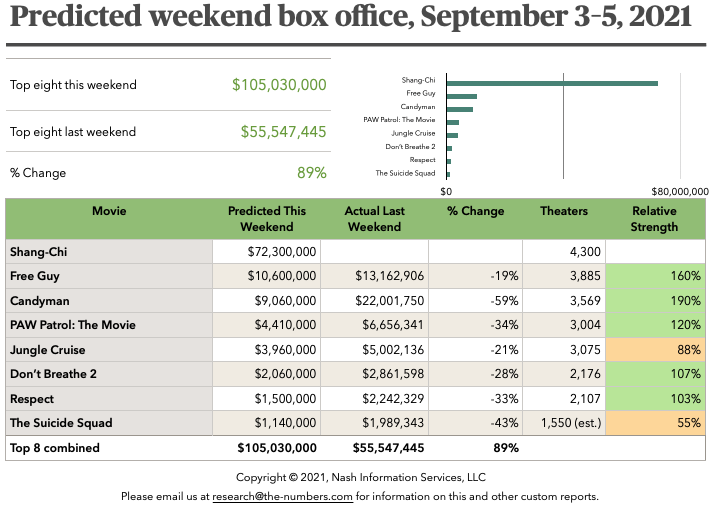 Overall, Shang-Chi will boost the market considerably this weekend, and the top eight films will most likely clear $100 million between them. That would make this only the second weekend in 2021 to produce over $100 million in box office earnings. The timing of its release will also make this an unusually strong weekend for September, which held the pre-pandemic record for the lowest box office total for all movies combined with the weekend of September 15, 2000 generating only $54.2 million in revenue.

The problem we have now is the lack of strength in depth: that miserable weekend in 2000 still had 17 films earn more than $1 million over three days. This weekend will probably see only seven or eight titles hit that mark. Disney should take some credit for releasing films right now, and, for all the complaints about their hybrid release strategy, Warner Bros. too. The lack of new films is certainly hampering the recovery, and the list of wide releases through the rest of the year is getting thinner at the moment, which is a troubling sign.

For this weekend, though, we have should have some fuller theaters and super hero action to enjoy. Let’s make the most of it.

Many Thanks To The following Website For This Valuable Content.
Weekend predictions: Shang-Chi hoping for $70-million weekend