The film versions (remakes in lingo) are as old as the cinema itself. For example, when the work of one of its pioneers The Great Train Robbery (Edwin S. Porter, 1903) had a first unauthorized version the year after its release. It is important to differentiate the remakes of the sagas like that of Star Wars: They are not prequels or sequels, but reissues of the same story directed and performed by different artists at different times.

These days it just premiered Little women, the most recent example of this endless chain made up of almost identical links. If we search for “little women” on IMDB, the most influential database of audiovisual works, we will obtain a long dozen of film, television and transmedia versions. Despite this, surely this article will receive a comment in which it will be warned that “it contains spoilers” (¡?).

Often the reason for each new release is to minimize financial risks, as these are stories that are known to work, thus saving on the initial investment. Or it is a question of reissuing them through new technologies, or of promoting new actors or directors. Also to pick up the Zeitgeist (spirit of the age) as now with feminism. But all this does not explain the anthropological meaning of this phenomenon of reissues. That is why I propose a different approach to the phenomenon of film versions, putting it in relation to the structure of myths.

How does a romantic melodrama of youth literature cross generations and fashions? What is the meaning of its endless adaptation to each new age and environment? These and other issues will be discussed in 2020 at a congress dedicated to the author of the homonymous novel on which it is based. Little women, Louisa May Alcott, in which yes, feminism will also be discussed. But here I invite you to reflect from the text itself, without prejudice.

On Little womenIn a sense, a reflection is proposed on our need, as readers / spectators, to repeatedly return to the stories that we know from three elements.

In the first place, the protagonist, Josephine “Jo” March (Saoirse Ronan) –who is also the narrator and a transcript of both the novelist and the director of the film– writes short stories of “love and thunder” that her editor cuts by animating her that they look like or are versions of the stories that your readers already know. 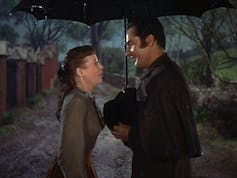 The second element is related to the first, because when towards the end of the film Jo writes her first novel, it is no longer just another story, but it exudes the unique, dramatic and exciting story of her family. And, despite this, its publisher and its audience still hope to recognize the same old story there, in this case, symbolized by the fact that the protagonist ends up getting married, as it will eventually happen. It is, then, about protecting the emotion of the reader / viewer, which crystallizes in that iconic image of the lovers kissing “under the umbrella” that gives the title to the penultimate chapter of the story and that Jo lives simultaneously, as if the book were a version of his life and vice versa. Thus, this reader-viewer feels sure of living a story in which he can recognize himself, like the child who, before falling asleep, only accepts to listen to the same story over and over again without the parents changing a single comma to do so. ensure the truthful reissue of your emotion.

The sweet monotony of the versions

Thirdly, we have a more subtle reference and linked to the narrative structure of the film, which, furthermore, is not found in the original novel – nor surely in any of the other versions of the film. I am referring to the sequence, halfway through the story, in which we witness scenes from childhood on the beach. At the end of this segment we begin to hear the voice and off of Jo reciting a few lines from the book The Mill on the Floss that George Elliot (with whom Alcott bears many similarities) wrote in 1860, that is, a year before this chronological moment in the childhood of Little women:

“We could never have loved the earth so well if we had had no childhood in it, if it were not the earth where the same flowers come up again every spring that we used to gather with our tiny fingers…”

“We could not love the earth so much if we had not lived our childhood in it, if it were not the same land where every spring the same flowers grew that we picked with our tiny fingers …”.

Those same flowers that, since childhood, grow every spring are the versions of the same stories that move us and that we are willing to experience again, although we know perfectly their color, their aroma and… their thorns.

Without a solution of continuity, he jumps to the present of the story, 1869; We’re on the beach again and Jo reads that same novel to Beth, that is, the scene is reedited, but now it’s just the two of them and we see the book in her hands. Jo reads almost from the same paragraph:

“What novelty is worth that sweet monotony where everything is known and loved because it is known?” (to Beth) How great is that?!“

“What novelty can be compared to this sweet monotony in which everything is known and loved, precisely because it is known? (To Beth) What a great phrase!”

Indeed, in the face of contemporary fear of spoiler, that is to say, of the immediate dissatisfaction resulting from the empty novelty, there are certain texts, especially those that most help us to build our subjectivity, that awaken the curiosity of our unconscious where everything becomes known, an epic that does not reside in surprise, but in recognition and in that sweet monotony.

The need for myth

The novel on which it is based Little women It begins with a phrase –which is also pronounced by Jo in the film– that places us directly in the wake of the myth and brings us fully into a conflict stemming from the ephemerality of repetition: “Christmas will not be Christmas without gifts”.

Already in the film, a little later, Jo attends a representation of Twelfth Night (King’s Night, W. Shakespeare, 1601) in which the love triangle and the happy ending that occurs in Little women… We could continue with many more clues and allusions similar to actions than must be repeated and that they tell us about a great script in Little women, since most are original contributions regarding the novel.

Therefore, to finish, I suggest you think about these reissues in relation to myths, understood as those stories that, beyond their greater or lesser factual veracity, are, as Mircea Eliade would say (in his book Myth and reality), true. In this sense, Jesús González Requena has pointed out how “the characteristic of mythical stories is, precisely, to tell what needs to happen”.

Here that final scene in which the March family throws Jo to the station in pursuit of her lover Friedrich (Louis Garrel) takes on its full meaning. We can say, then, that it was necessary for that to happen, as well as the reissues of the classic or mythical stories that, cyclically, feed our imaginary.

This article was originally published on The Conversation. Read the original.

Many Thanks To The following Website For This Valuable Content.
Little women as a myth and the reason for the film versions