As a result of these moments of isolation and distance, this video of Cat Stevens with his son Davey It has become one of the most shared on the networks.

Like so many other artists, friends or family, video conferences and creativity have helped to keep in touch and generate wonderful pieces full of ingenuity and great beauty. In this case Cat Stevens and your child make an interpretation of your “Father And Son” with lyrics adapted to the times and in which good advice, humor and complicity are always present.

It’s not time to make a change
Just relax, take it easy
You’re still young, that’s your fault
There’s so much you have to know
Find a girl, settle down
If you want you can marry
Look at me, I am old, but I’m happy

I was once like you are now
And I know that it’s not easy
To be calm when you’ve found
Something going on
But take your time, think a lot
Think of everything you’ve got
For you will still be here tomorrow
But your dreams may not

How can I try to explain?
When I do he turns away again
It’s always been the same, same old story
From the moment I could talk
I was ordered to listen
Now there’s a way
And I know that I have to go away
I know I have to go

It’s not time to make a change
Just relax, take it slowly
You’re still young, that’s your fault
There’s so…

As a result of this video I have been re-listening to his discography and it seemed appropriate to bring here also part of the history of another song by Cat Stevens, “Matthew and Son”, title and single from his first album by 1967. 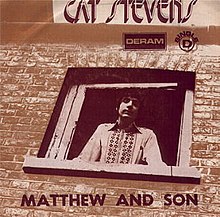 Cat Stevens it had a good number of hits and some wonderful albums that accompanied me every day in the seventies. I remember the magnificent concert that he gave May 28, 1976 in the old Real Madrid sports hall in La Castellana, going on stage with his leg in a cast and on crutches after falling in the hotel bathtub.

“Mathew And Son” is still the most popular song of Cat Stevens in England, although in Spain I think his greatest successes were “Wild World”

and “Morning Has Broken” .

My favorite album is “Foreigner”, the memories that all his songs bring me are very good, especially the “Foreigner Suite” which opens the album occupying the entire A side of the vinyl with its 18:19 minute duration.

According Cat Stevens, the title of the song “Matthew and Son”, comes from the name of your tailor’s business, Henry Matthews, who made him the suits and from the one who took the idea of ​​the history of the worker who is the character of the song.

Stevens would comment later: “I had a girlfriend and she worked for a big company, and I didn’t like the way she had to spend so much time working.” Behind all this there was a small social criticism about people who are “slaves” of other people ”.

The song was covered by the band The Delgados in 2002 and was included in their 2006 collection The Complete BBC Peel Sessions.

Apparently the verse of the song sounds similar to the single “Mad World” from Tears For Fears 1982.

Personally I do not find such similarity. Maybe my hearing is failing a bit.

Up at eight, you can’t be late
For Matthew & Son, he won’t wait.
Watch them run down to platform one
And the eight-thirty train to Matthew & Son.
Matthew & Son, the work’s never done, there’s always something new.
The files in your head, you take them to bed, you’re never ever through.

There’s a five minute break and that’s all you take,
For a cup of cold coffee and a piece of cake.

Matthew & Son, the work’s never done, there’s always something new.
The files in your head, you take them to bed, you’re never ever through.
And they’ve been working all day, all day, all day!

The song is about a business called “Matthew And Son”; The workers there, some of whom have fifty years of experience in the business, are wage slaves, and because they are all too apathetic or too shy to do so, none of them dare to ask for wage increases, despite the demands. economic difficulties . (“He has people who have been working for fifty years | Nobody asks for more money because nobody dares | Even though they are quite low and the rent is late”). They get few breaks in their routine and their food is generally poor. (“There’s a five minute break | And that’s all it takes | For a cup of cold coffee and a piece of cake”).

The type of business you are dealing with “Matthew And Son” It is not specified in the letter. Most likely it is an office in the city. (“The files in your head, you take them to bed, you never finish them”).

The song “Mathew And Son” has been part of soundtracks such as “Stardust” from Michael Apted, in which the English singers appear David Essex and Adam Faith. Also in the movie “Academia Rushmore” from Wes Anderson.

In the recording of“Mathew And Son” they participated on the bass John Paul Jones who would be bassist and keyboardist of Led Zeppelin,

Nicky Hopkins to keyboards, studio musician for artists like The Who, The Rolling Stones O The Kinks,

Alan Tew he was in charge of the orchestral arrangements. Great musician, arranger and composer of the soundtracks of a good number of films and television series.

Cat Stevens is the stage name of Steven Demetre Georgiou, also known as Yusuf Islam |, Yusuf and Yusuf / Cat Stevens and this is his studio discography from 1967 to 1978

What Yasuf Islam, Yasuf/Cat Stevens his discography spans from 1995 to 2020

Many Thanks To The following Website For This Valuable Content.
RPM: “Father and Son, Cat Stevens and Davey” / “The Story of” Mathew And Son ”