Shang-Chi and the Legend of the Ten Rings isn’t just the biggest game in town, it’s practically the only game in town at the moment when it comes to earning dollars at the box office. The Marvel movie will earn about $35.8 million this weekend, according to Disney’s Sunday morning projection, a decline of 53% from its three-day opening (a good figure these days), and will stand at $145.6 million or so in total by the end of today, making it already the fourth-highest earner at the domestic box office in 2021 with plenty more to come. Malignant’s $5.57 million box office debut will only be enough for third place this weekend and raises further questions about Warner Bros.’ strategy of releasing films simultaneously on HBO Max. 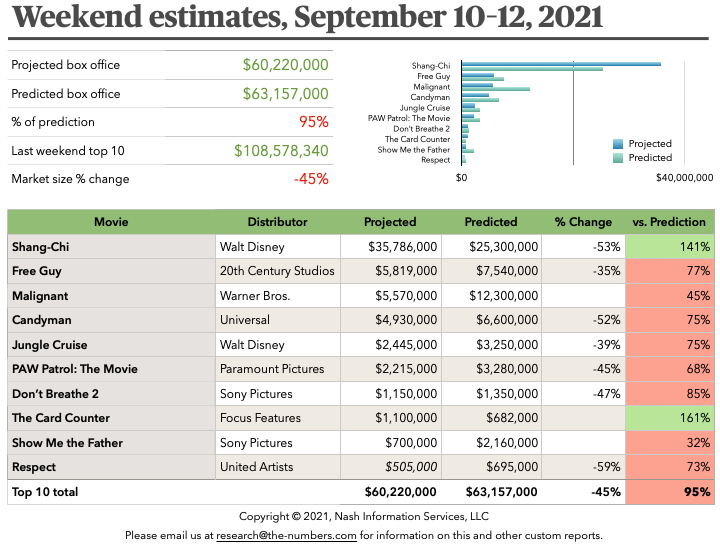 The sea of red—with two islands of green—on the right-hand side of the chart above really tells the story of this weekend. Shang-Chi held on well, The Card Counter opened strongly, and everything else struggled. That’s partly due to the tough comparison with the Labor Day holiday last weekend, but also suggests that moviegoers looked at their options this weekend and favored Shang-Chi over everything else. That hit Malignant particularly hard, even though it’s had good reviews. Warner Bros. seemed to enjoy the best of both worlds when Godzilla vs. Kong debuted to good box office numbers back in March, in spite of its simultaneous release on HBO Max. But, with The Suicide Squad and Reminiscence also significantly underperforming their potential at the box office, the studio has now had three straight duds. They may feel they need to stick to their guns on these hybrid releases through the end of the year, but there’s no denying at this point that Dune and The Matrix Resurrections in particular would benefit from an exclusive theatrical window, and I can’t imagine theater owners would push back hard on the studio if it gave them one.

In more positive news, The Card Counter’s $1.1-million opening is a pleasant surprise given its modest 580-theater rollout. Its theater average, $1,897, is in line with Stillwater, which opened with $5.19 million from 2,531 theaters in late July. It’s also the second-best theater average in the top ten, behind Shang-Chi. With strong reviews and an older target demographic, it could settle in for a relatively good run in theaters over the next few weeks.

Things are looking tougher for Show Me the Father. I mentioned on Friday that this was a tough film to predict because there haven’t been many faith-based films released during the pandemic, and no faith-based documentaries at all. The theory that people of faith would be more inclined to go to movie theaters because some have already been going to church regularly during the pandemic doesn’t seem to have held up. With a theater average of $652—the lowest in the top ten among films reporting—it seems unlikely that the film will stick around for long.

All in all, with the exception of Shang-Chi, it’s looking like another tough month at the box office.

Many Thanks To The following Website For This Valuable Content.
Weekend estimates: Shang-Chi keeps the market afloat with $35.8-million second weekend