Assure in this interview Mario Lopez, guitarist of this unique formation straddling Port Charlotte in Florida and the Prosperidad neighborhood in Madrid, which this year and a half of confinement and uncertainty about the future we have lived through due to Covid-19 has had a powerful influence on their way of composing and making this new album that they present to us, ‘Rock’n Romantic’. It is also a very stylistically varied EP in which Indiana he adds elements of many types of music not so present in his previous works and that makes it a very pleasant work to listen to. Mariano Muniesa has found no better way to get to know the backroom of these songs better than by letting their protagonists explain them.

Why this “romantic” twist in these new songs and that more melodic orientation, softer than in previous albums?

“I think it was the result of the pandemic. The lives lost, the sadness of not being able to imagine the future, the uncertainty of a disease that does not end and of which new variants do not stop appearing … These are factors that have affected us personally and have undoubtedly led us to this CD be calmer, more full of affection for everything and for all human beings ”.

Friendship and love are themes that appear repeatedly in the lyrics of these compositions. Could it be that after so many months of isolation and confinement, and consistent with what you say, now those feelings have another meaning for you?

“Not just for us, but for the whole world. This pandemic has made us reflect once again on how fragile life is, on how important it is and what it means to love each other, have empathy for others and help each other. I believe that these values ​​regain a key role in our lives ”.

What records, songs, sounds or new influences do you think have left their mark on you when making this ‘Rock’n Romantic’?

“It’s all Indiana. It is a 100% Indiana album, much more personal because as I was saying, we have lived through a very hard and very difficult time and as artists we are very sensitive to emotions and the environment in which we live. In this CD we have let out influences from great artists like Van Morrison, Dizzy Gillespie, Latin jazz or New Orleans music, something that I think can be appreciated very well in songs like “Give It Up”. Bands like Chicago, especially for the wind section, both in quieter songs and in other more direct ones, have also left a mark on these songs, without a doubt ”.

Is the Kiosco de la Alameda a real place, does it exist? In that case, where is it and why is it the setting for the story told in the song?

“Yes! It is a kiosk on the outskirts of the walls of Segovia, in front of the home of our great friend Luis Mario Quintana “El Profe”. It is located next to a river and there is a very nice mall. The Kiosk has been closed for a couple of years, but it is a real place with which we have many wonderful experiences associated ”. 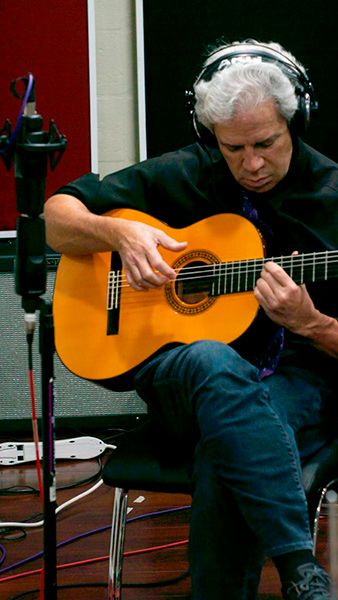 The guitarist in the recording studio

You mentioned before “Give It Up”, a song that is one of the ones that I personally liked the most on the album, basically because it has a rhythm that reminds me a lot of rock from the 60s and the winds abound. How did this song come about and what led you to decorate it with a brass section, as in “Just A Little”?

“As I had told you, ‘Rock’n Romantic’ is a conglomeration of different influences from the music that we like, combining various types of genres gathered in five songs. From pop music to jazz, Cuban, Andalusian and melodic rock music. For my taste, we still need some rhythm and blues-style choruses in “Give It Up” ”.

Did you use a hammond organ on “Have You Ever”? It is perhaps for me the best of this EP, tell me about it, how it came about, etc.

“A song that I personally love. I’m glad you like it so much, Mariano. It talks about the life of a person who, despite the adversities of life, has been able to reach his goals with great effort and great sacrifices. A lesson to learn and I would like to think that it can serve as a guide for many people ”.

How was ‘Rock’n Romantic’ recorded? Have you been able to rehearse the whole band together at some point? Did you coincide in the study? What methodology did you follow?

“It was a recording totally conceived and materialized in the studio. Pepín and I have participated together with two talented sound engineers who also play drums. And a horn section by some fabulous local musicians too. We did the scores, the arrangements and the rest was directly playing and recording ”.

Are there plans in sight to present this album live, as you did before when you came to Madrid, to do four or five concerts over the course of a week?

“We would love to be able to present this CD and the next ones in concert, as well as return to live performances in the not too distant future. With many wishes to return to our beloved Spain and share these songs with all of you, our family ”.

Mariano Muniesa accumulates a long career in music journalism both in the written press and on radio and TV. He has directed programs on the main radio stations in the country (Cadena 100-COPE, Onda Cero, SER-40 Principales) on 40TV-Canal Plus and Onda 6 TV and is the author of numerous biographical books and essays on the world of rock: Rolling Stones, Jimi Hendrix, Janis Joplin, Metallica, Red Baron, AC / DC and a long etcetera.

Many Thanks To The following Website For This Valuable Content.
Interview with Indiana: “This new album combines all the musical styles that have influenced us the most”