The story goes that it all started when they launched into covers where they showed their devotion and a special connection to the grunge movement. Classics from Alice in Chains, Soundgarden, Stone Temple Pilots, Nirvana and Pearl Jam were immovable in his repertoire, which was completed with songs from other rock bands. However, with the passage of time and, because the voice of their singer fitted perfectly (in every sense), they decided to throw themselves completely into the compositions of Eddie Vedder, considered by many the last rebel of that movement of the 90s that branded a generation across the planet by fire. From that moment in 2016, Release began to take shape, the band with a Neuquén label that pays tribute to Pearl Jam and that almost sold out the tickets for the three shows that it will present from Friday in Mood Live (Minister González 40). Marcos Tarifeño (voice and guitar), Germán Francia (bass and backing vocals), Sebastián De Urrutia (guitar), Martín Herrera (synthesizer piano and backing vocals), Roni Colipe (guitar) and Alejandro Tarifeño (drums) will return to the scene after two years of standing up and of his last performance in Kimika de Cipolletti before some two thousand people.

A few days before the first show, which will be Friday (Saturday and Sunday they sold out tickets), Ale Tarifeño anticipated a little what is coming and told the state of the band, which again turned on the machinery and awaits another call from Buenos Aires, where already captivated the public. “We are happy to play again and also because we will do it before the public, who were also eager to see a live show. The last time we played was in August 2019 as part of the Alive Tour. Commonly we always make one date per year. Before, I had passed through Buenos Aires where we played three dates: Martínez, Strammer Bar in Palermo and at La Casa de Luca, where we were invited to a tribute to Nirvana ”, said the drummer.

Initially, Release only had one scheduled date in Mood. But the tickets flew and two more performances were added, a real surprise for the Neuquén band, which did not expect so much response from the public. “We are super surprised by how quickly the shows sold, because usually the sales were always progressive, and this was all at once. I think people really want to have a good time and need to listen to live music. I think that in general it is a whole accumulation of energies, ”said Tarifeño.

The shows that the local combo will give will last for two hours and at the beginning there will be room for an acoustic set. “Apart from classics like ‘Evenflow’, ‘Black’, ‘Alive’, ‘Yellow Ledbetter’, we will be doing songs included in the film Into the Wild, which marked Eddie Vedder’s first solo work. I think it’s something that was never done in the country and we only do it when we play in the Valley. And another of the songs that will sound will be ‘Release’, a song that is so played to us live and that Pearl Jam fans always appreciate it very much ”, revealed the musician.

“Release” was the first song played by Pearl Jam at their first concert (October 22, 1990) almost a year before they first recorded their debut album, Ten. The theme is the last one on the album list.

The tribute we do has to do with connection. Tribute bands have their place because the public approved and adopted them. “

At first, the tribute bands were quite questioned and even disapproved. Currently, the issue took a turn and they already have their place. Precisely, given the different views that may exist on the subject, the musician explained: “We have no prejudices about the music and the tribute we make to Pearl Jam has to do with connection and taste. It seems to us that his songs are part of many lives. And there are songs that are already incorporated into one’s DNA because we started listening to them when we were kids. Tribute bands have their place because the public approved and adopted them ”. And then, he remarked: “Release is a band that is connected with that energy that we always feel with the music of Pearl Jam and is directed to that. The idea was always to take to different places and give people the greatest possible experience of what is one of the best bands in the history of music. “ 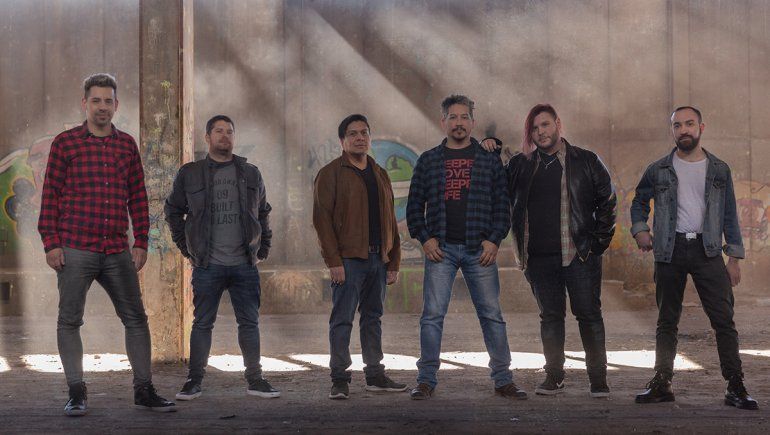 We are amazed at how quickly the shows sold. Sales are usually progressive, and this was all at once ”.

If there is something that stands out on stage in Release, it is the voice of Marcos Tarifeño, who has a register very similar to that of the leader of Pearl Jam. For the drummer and the rest of his teammates, that simply has to do with a “natural talent.” “The similarities have to do with an incredible talent that came and went naturally. But also the connection that my brother has with Pearl Jam weighs a lot. It is a band that he listens to from a very young age and it is part of his history and his life. It is quite mystical about Marcos with Pearl Jam, which has been the soundtrack of many ”, considered the interpreter’s brother. And he added: “At the beginning we realized that the songs that most connected him to Marcos were those of Pearl Jam and that’s how we began to dig deeper. And from four songs that we made in a period of two months, we have about 30 songs ready ”.

Release will be the first time he will perform on the Mood stage and he does not rule out doing it again given the success of ticket sales he has had and the response from the public. Regarding the debut in that space, through which Fabiana Cantilo, Coti, Leo García have already passed and which will soon have Fernando Ruiz Díaz (will be presented on the 24th) and in October at Kapanga, Tarifeño highlighted the importance of having a new place for the shows. “Mood is an excellent and well-deserved place for the local scene, and I think we have to be grateful because the bet is not only for national artists. Regional artists are given the possibility of being in a place with a great setting, sound and everything that a first-class show requires, with a height of any theater in Buenos Aires ”, he said. (LC)

Many Thanks To The following Website For This Valuable Content.
Pearl Jam is the soundtrack of our lives